Oath of Office Ceremonies for Commissioners and DA 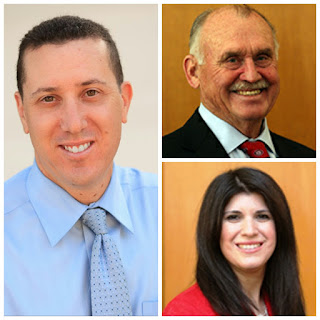 “The District Attorney is the person elected to represent the people of Mesa County. I am humbled by the support, and honored to show up to work each day as the lawyer representing this community.” Rubinstein said.

“Thank you for your continued support, it has been my honor to serve as your County Commissioner since 2013,” Justman said. “I will continue to work hard on issues that Mesa County faces.”

County Commissioners serve for four years for up to two terms. Their primary function is to govern by the Colorado Constitution and on behalf of the legislature to represent the interests of, and provide public services desired by the citizens of Mesa County.

“I am honored and humbled to have the continued confidence of the Mesa County voters,” said Pugliese. “Thank you for allowing me to represent you. I will continue to represent Mesa County on local, state and federal issues and fight to protect and enhance our economy.”

Posted by Mesa County, Colorado at 8:48 AM