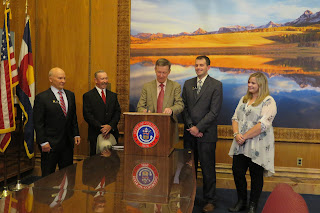 On April 24, Governor Hickenlooper signed HB17-1049 into law. The bill sponsored by Representative Dan Thurlow revises the way interest payments are made on tax abatements.

"What this law does in simple terms is good for taxpayers in Colorado," Mesa County Assessor Ken Brownlee said. "This law helps to correct a situation whereby very few taxpayers are actually paid to delay or neglect to address property tax issues and paid by all taxpayers in their district not to do so."

Overpayment of property taxes can result from classification errors, clerical errors or incorrect valuation. A taxpayer who overpaid their tax may apply for a refund within two years after the tax has been levied, but prior to this law, someone who did not address the issue at the proper time could collect 1 percent per month interest for the full two years and more. They could only take advantage of this opportunity if and only if the taxpayer did not address the issue during the time frame established by the legislature.

Local jurisdictions that received the property taxes are immediately responsible for repaying the taxes and the interest once the abatement or refund is approved. In Mesa County, an average of over a million dollars is abated each year.

The current process allows only a taxpayer that has not protested the valuation during the protest period to file a petition for abatement. The abatement petition may be filed up to two years after the tax has been levied. By then, property taxes have been appropriated to taxing authorities to expend funds on necessary services for the community.

"Rep. Thurlow simply proposed a bill that would limit the accrual of interest to begin only after an abatement petition has been filed," Brownlee added. "The taxpayer may be made whole and interest accrues once the taxpayer addresses the issue, but should a county drag its feet in processing the petition, interest is accruing. Dan Thurlow sponsored this when no one else wanted to touch it. $90 million was on the table."