On Monday, March 18, 2019, the Board of Mesa County Commissioners sent a letter to President Trump urging him to appoint David Bernhardt to the position of United States Secretary of the Interior.

Mr. Bernhardt recently helped western Colorado counties obtain reimbursement of the oil and gas lease revenue held by the Department of Interior that was owed to rural communities from the Anvil Points Naval Oil Shale Reserve. The federal government had withheld all mineral lease funds, royalties and bonus payments from 1997 to 2008, from Garfield, Mesa, Moffat and Rio Blanco counties. Additionally, the withholding created a surplus in the trust fund, and when the site cleanup was completed in 2011, the funds were not released. This year, thanks to Mr. Bernhardt, the affected counties finally received reimbursement of their funds.

With his extensive background in both the private and public sectors dealing with public lands issues, Mr. Bernhardt is undoubtedly experienced and qualified for the position. We are grateful for Mr. Bernhardt’s leadership and ability to find effective advocacy within complex issues for the benefit of our counties. We consider his level-headedness and focus on what is best for our Colorado communities and the nation as a whole a great asset.

Mr. Bernhardt’s extensive knowledge of public lands and energy issues make him an avid leader with skills to see issues from multiple perspectives to maintain and improve partnerships among federal, state, and local governments.

Without reservation, the Board of County Commissioners highly recommends David Bernhardt for the position of United States Secretary of the Interior. Thank you for the opportunity to comment." 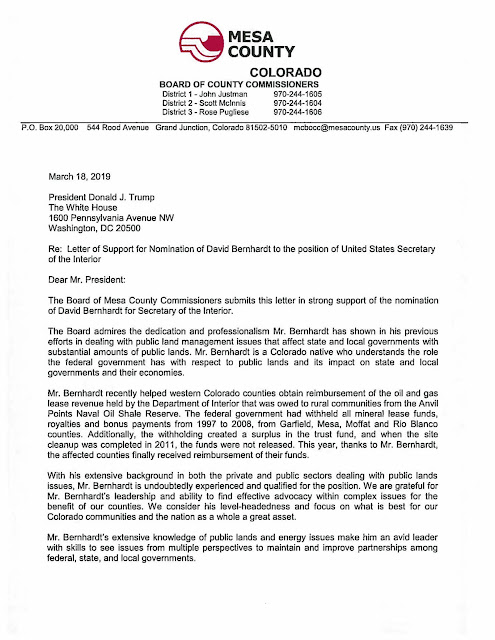 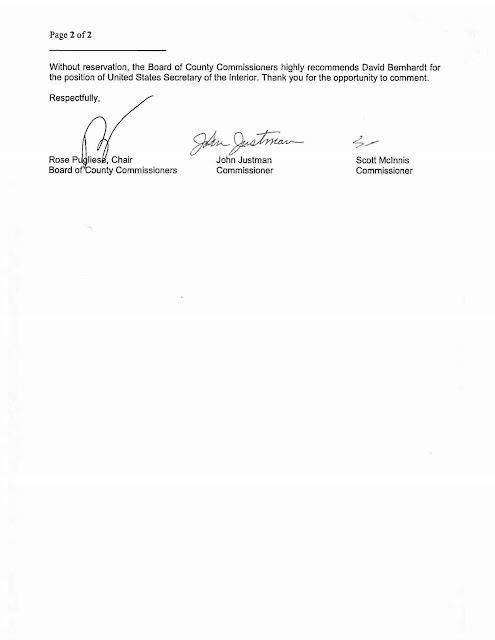