Posted by Mesa County, Colorado at 1:47 PM No comments: 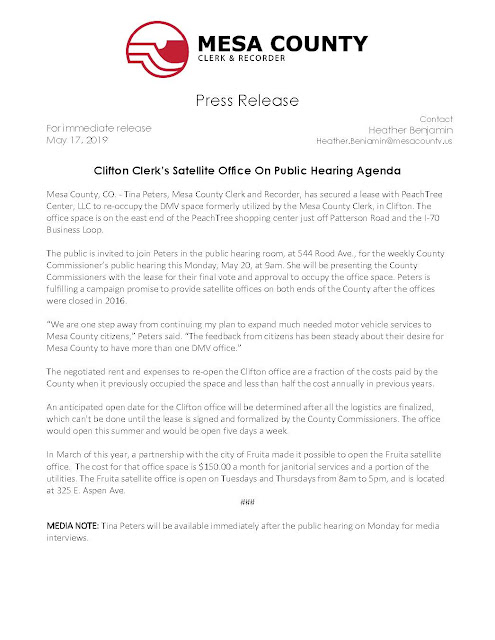 Mesa County, CO. - Tina Peters, Mesa County Clerk and Recorder, has secured a lease with PeachTree Center, LLC to re-occupy the DMV space formerly utilized by the Mesa County Clerk, in Clifton. The office space is on the east end of the PeachTree shopping center just off Patterson Road and the I-70 Business Loop.

The public is invited to join Peters in the public hearing room, at 544 Rood Ave., for the weekly County Commissioner’s public hearing this Monday, May 20, at 9am. She will be presenting the County Commissioners with the lease for their final vote and approval to occupy the office space. Peters is fulfilling a campaign promise to provide satellite offices on both ends of the County after the offices were closed in 2016.

“We are one step away from continuing my plan to expand much needed motor vehicle services to Mesa County citizens,” Peters said. “The feedback from citizens has been steady about their desire for Mesa County to have more than one DMV office.”

The negotiated rent and expenses to re-open the Clifton office are a fraction of the costs paid by the County when it previously occupied the space and less than half the cost annually in previous years.

An anticipated open date for the Clifton office will be determined after all the logistics are finalized, which can’t be done until the lease is signed and formalized by the County Commissioners. The office would open this summer and would be open five days a week.

In March of this year, a partnership with the city of Fruita made it possible to open the Fruita satellite office. The cost for that office space is $150.00 a month for janitorial services and a portion of the utilities. The Fruita satellite office is open on Tuesdays and Thursdays from 8am to 5pm, and is located at 325 E. Aspen Ave.
Posted by Mesa County, Colorado at 11:02 AM No comments:

On Wednesday evening, community members wanting to acquire more in-depth knowledge on how local government works, began Inside Mesa County, a nine-week course that gives an inside look into Mesa County's departments and budgets including interactive presentations from elected officials and county departments as well as tours of several facilities.


Over 25 people are taking the free course this year, held Wednesday evenings at the old Mesa County Courthouse, 544 Rood Ave.

On the opening night, attendees heard from Commissioners Rose Pugliese and Scott McInnis, as well as County Administrator Frank Whidden.

If you are interested in attending our next class, please submit your application online at http://www.mesacounty.us/insidemesacounty/.

Posted by Mesa County, Colorado at 11:23 AM No comments: