Thank you, Mesa County IT!

Thank you to the hard-working men and women in our Information Technology Department for their tireless dedication during this time. We are grateful for all you do.

Not all heroes wear capes, some wear superhero masks.
Posted by Mesa County, Colorado at 11:43 AM No comments:


Activity continues on the Palisade Plunge Trail. The crew continues working up the ridge, completing another 700 feet of new trail, leaving them at milepost 27.59.

A total of 13.16 miles of trail has been completed, leaving four miles to go before completion of Phase 1 of the trail.

A second trail crew has started camping on-site at higher elevations and is finishing the roughed-in sections of trail leftover from last year. They will work down toward the lower crew on the ridge to complete the remaining four-mile part.

Construction for this section of trail encompasses areas that have been identified as raptor habitat. The raptor nesting season in the project area typically occurs between mid-February and mid-August. By mid-August, most young birds have fledged and left the nest.

Another raptor survey was conducted for this year because construction will be occurring within that nesting window. The study identified two nests within the construction area, one belonging to a Peregrine Falcon, and the other nest housing a Golden Eagle. Both of these nests require a ½ mile buffer zone and could delay construction of the trail within these two areas until July 31, 2020.

Another raptor survey is being conducted for the Phase 2 area of the Plunge, and results will be back soon.


On Thursday, May 7, Mesa County Search and Rescue took a helicopter to inspect the length of the trail from the Town of Palisade to the top of the Grand Mesa.

Their goal was to identify hazardous areas, locate possible landing zones, and check out motorized access points. Around 15 landing zones have been identified but will require clearing of rocks, trees, and other debris to create a safe landing zone in the event of a helicopter rescue.


Additional flights are being planned to measure and mark out landing zones and to possibly stage supply caches in various areas.
Posted by Mesa County, Colorado at 1:16 PM No comments: 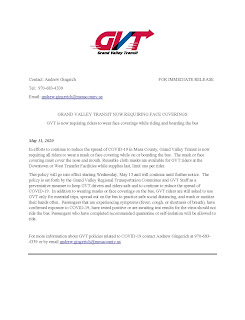 In efforts to continue to reduce the spread of COVID-19 in Mesa County, Grand Valley Transit is now requiring all riders to wear a mask or face covering while on or boarding the bus.

The mask or face covering must cover the nose and mouth. Reusable cloth masks are available for GVT riders at the Downtown or West Transfer Facilities while supplies last, limit one per rider.

This policy will go into effect starting Wednesday, May 13, and will continue until further notice. The policy is set forth by the Grand Valley Regional Transportation Committee and GVT staff as a preventative measure to keep GVT drivers and riders safe and to continue to reduce the spread of COVID-19.

In addition to wearing masks or face coverings on the bus, GVT riders are still asked to use GVT only for essential trips, spread out on the bus to practice safe social distancing, and wash or sanitize their hands often.

Passengers that are experiencing symptoms (fever, cough, or shortness of breath), have confirmed exposure to COVID-19, have tested positive or are awaiting test results for the virus should not ride the bus. Passengers who have completed recommended quarantine or self-isolation will be allowed to ride.

For more information about GVT policies related to COVID-19 contact Andrew Gingerich at 970-683-4339 or by email andrew.gingerich@mesacounty.us
Posted by Mesa County, Colorado at 1:10 PM No comments:

On Monday, May 11, 2020, the Board of Mesa County Commissioners approved a letter to the Department of Natural Resources requesting that state parks in Mesa County be opened for camping.

The proposed reopening will be done under the guidance of Mesa County Public Health, with certain restrictions listed in the letter. 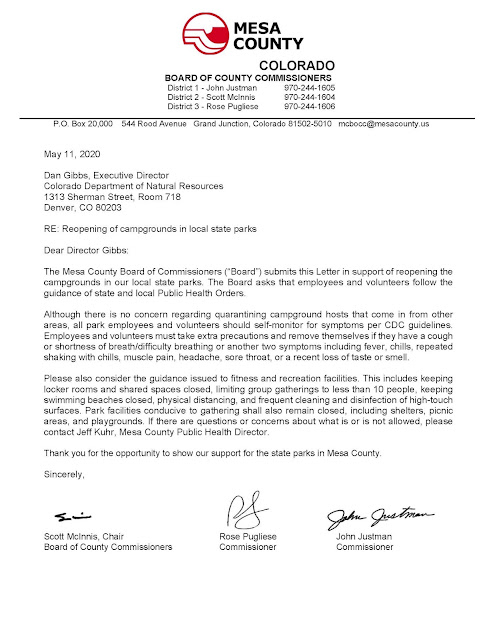 Posted by Mesa County, Colorado at 11:31 AM No comments:

The Board of Mesa County Commissioners today proclaimed May 10-16, 2020, as Police Week in Mesa County, and publicly salutes the service of law enforcement officers in our community and communities across the nation.


Since the first recorded death in 1791, more than 21,000 law enforcement officers in the United States have made the ultimate sacrifice and been killed in the line of duty, including three from local law enforcement agencies.

Deputy Edward Innes was killed on September 27, 1906, during an inmate jail escape, Fruita Police Department lost Acting Chief Dan Dalley in June 2001, and most recently, Deputy Derek Geer, of the Mesa County Sheriff's Department, died after being shot by an armed suspect in February 2016.

The names of these dedicated public servants are engraved on the walls of the National Law Enforcement Officers Memorial in Washington, D.C.
Posted by Mesa County, Colorado at 11:26 AM No comments: